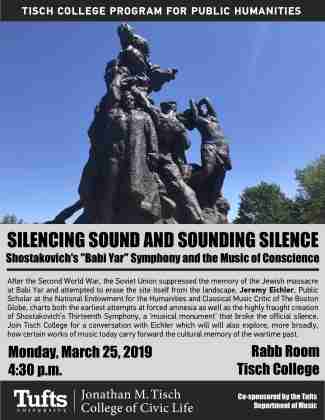 “Join Tisch College for a conversation with Jeremy Eichler, Public Scholar at the National Endowment for the Humanities and Classical Music Critic of The Boston Globe.

After the Second World War, the Soviet Union suppressed the memory of the Jewish massacre at Babi Yar and attempted to erase the site itself from the landscape. Critic and cultural historian Jeremy Eichler charts both the earliest attempts at forced amnesia as well as the highly fraught creation of Shostakovich’s Thirteenth Symphony, a ‘musical monument’ that broke the official silence. The talk will also explore, more broadly, how certain works of music today carry forward the cultural memory of the wartime past.

This event is sponsored by Tisch College’s Public Humanities Program and the Tufts University Department of Music.”

Event is free but RSVP is requested here.