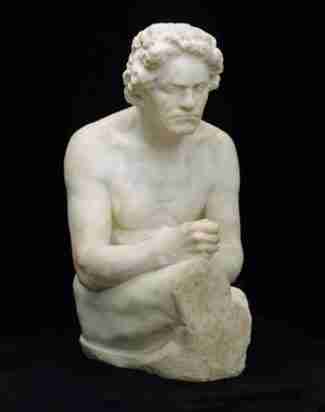 Recent visitors to the Rabb Gallery at the Museum of Fine Arts may have noted a new resident, with an aura of sublime intensity and alluring strangeness. He is Ludwig van Beethoven, chiseled from white marble like an ancient Greek god, seated on top of an invisible Olympus. He is also, one quickly notes, completely naked.

At first glance this remarkable piece by the artist Max Klinger is filled with mysterious tensions. The forcefulness of the composer’s rippled muscles is offset by the odd vulnerability of his nude torso. His hands rest on his lap but they are clenched into fists, ready for a fight. His heroic resolve is softened by his hunching posture, his head bowed at an angle that projects a certain existential weariness. It has been a long journey for this Beethoven.

The sculpture’s story in fact runs through the golden age of Vienna at the turn of the 20th century, extends onto the battlefields of the First World War, and finds its nadir in the downfall of one of the most illustrious Viennese families of the era. Curiously enough, the sculpture itself, donated to the MFA in 1952, left the museum in 1985, as this Beethoven essentially retraced his steps and, like a homing pigeon, returned to Vienna. He remained on loan at the Wien Museum for over 25 years, and was only placed on view in Boston this summer.

The sculpture’s lawful ownership is uncontested. The same cannot be said of the ideas it once represented — or more precisely, the checkered career of the utopian Enlightenment dreams embodied in Beethoven’s Ninth Symphony, encoded in this sculpture, and enshrined for many 19th-century Germans as an article of religious faith.

The idea for the sculpture came to Klinger in Paris in the 1880s, when he was seated at the piano playing music of Beethoven and was suddenly struck with the vision of a fully formed monument. He pictured the composer represented as a Greek deity, enthroned on top of a mountain, an eagle cowering at his feet, the faces of angels decorating his throne. Klinger trolled the quarries of Europe in search of his materials, and ultimately created the exact work he had envisioned, using mostly bronze and ivory to conjure the mountain throne and chiseling the composer, in all his pensive majesty, from white marble.

The completed monument was unveiled as the centerpiece of the 14th exhibition of the Vienna Secession in 1902. The avant-garde artists who formed the Secession transformed their own building into a temple-like setting designed to showcase Klinger’s work to maximum effect. Gustav Klimt created his now-famous Beethoven frieze for the occasion; Gustav Mahler led his musicians in an arrangement of portions of the Ninth Symphony. The monument caused a sensation across Europe and was hotly debated in the wickedly satirical Viennese press, which did not shy away from comparing Beethoven’s bronze throne to one of the less regal (nowadays) porcelain variety.

From today’s vantage point, the most obvious question is: What was a group of progressive 20th-century visual artists doing worshiping a composer who died in 1827? The answer begins with the fact that music in general — and the unclouded heroic image of Beethoven in particular — held in that moment a vast symbolic power as an antidote to the disappointments of the dawning modern era, or to what Max Weber once summed up neatly as “the disenchantment of the world.” In music, as in their own aesthetic pursuits, these artists found a retreat from the emerging cold-eyed positivism of the sciences, from the perceived failures of the Industrial Revolution and Austrian liberalism, and from the violent political forces centrifugally tugging away at Franz-Joseph’s Empire.

Some of those Central Europeans who believed most fervently in music’s ennobling powers were of Jewish descent, from families that had embraced the notion of uplift through cultural learning. They had pored over their Goethe and their Schiller, and invested in the idea that worshipping at the altar of Austro-German culture could grant them equal membership in their own societies. Conversion, as we know, was commonplace. These families later supported in large numbers Vienna’s new modern art culture, as patrons and audience members, and their children helped invent it as artists.

This, in essence, was the story of the eminent Wittgenstein family. Born in 1847, Karl Wittgenstein amassed an astonishing fortune in the steel industry and helped fund the building of the Vienna Secession. His home, the Palais Wittgenstein, boasted a lavishly appointed music room, where Brahms, Strauss, Mahler, and Schoenberg all took in performances. As described in Alexander Waugh’s meticulous and riveting book “The House of Wittgenstein,” the music room was decorated with massive hunting tapestries and 10 gilded lamps. It featured a large organ and two Bosendorfer grand pianos. And there, perched above it all, casting a penetrating gaze on all who passed below, was Beethoven.

Not Klinger’s giant monument from the Secession exhibition, but a smaller torso produced by Klinger and striking an identical pose. Karl Wittgenstein had commissioned it, and this is the sculpture now on view at the MFA.

Among the many musicians to create music in this marble Beethoven’s presence was Paul Wittgenstein, the eighth of Karl’s nine children, who as a boy accompanied the great violinist Joseph Joachim and later played piano duets with Strauss. He went on to pursue a career as a concert pianist, making a celebrated debut in December of 1913. When war broke out a few months later, as the model of a cultivated Austrian patriot, Paul reported for military duty. (So did his brother, Ludwig Wittgenstein, who went on to become one of the most revered philosophers of the 20th century.)

On Aug. 23, 1914, Paul was dispatched with six other soldiers on a mission to gather intelligence on Russian troop positions. The soldiers came under enemy fire and, while completing his mission, Paul took a bullet that exploded in his right elbow. He was dragged to a field hospital while drifting in and out of consciousness. He awoke to find his right arm had been amputated.

Of all the horrific maiming to have taken place on the battlefields of World War I, this was a moment keenly remembered precisely because it reverberates in concert halls until this very day. Instead of forfeiting his musical dreams, or as his family feared, committing suicide, Paul dedicated himself to becoming a professional one-armed pianist, and commissioned an entire new repertoire from the leading composers of the day, including Strauss, Prokofiev, Hindemith, and Ravel. It was Ravel’s response to the commission that became the famous Piano Concerto for the Left Hand, a staple of modern concert hall programming.

As a pianist Paul rose to international prominence during the interwar years, and even toured in Boston, performing with the BSO under Serge Koussevitzky. His profile on stage during the 1920s and early 1930s served as a powerful reminder of a generation marked by the Great War. And long after his death in 1961, the repertoire he commissioned is still inscribed with the memory of that devastating conflict.

Of course, for families like the Wittgensteins, things would get far darker still. Karl died in 1913, and Paul and his siblings watched Hitler’s rise with concern for Austria’s independent future, though with no sense that Nazi anti-Semitism could possibly target them. The family had been practicing Catholics for almost 100 years. In his book Waugh describes one morning a few days after the Anschluss, when Paul walked into a room looking ashen. He told one of his sisters, in a state of disbelief: “We count as Jews.”

Thus began another complicated story of the family’s battle to save itself by appealing its racial designation under the stringent Nazi race laws. (Even the beloved waltz composer Johann Strauss was found to have a Jewish ancestor; his family records were quietly adjusted.)

The Wittgensteins ultimately succeeded in changing their racial status at the price of most of their fortune. (Some of their art collection remained in the family’s hands, including the Beethoven torso.) Paul managed to escape Austria, landing in New York in 1938. In 1952 he donated the Beethoven — which had remained in Austria during the war — to the MFA. At around the same time, the once-spectacular Palais Wittgenstein was sold and demolished. It had been heavily damaged by Allied bombing, the ceiling above its opulent music room shattered. After Paul’s wife’s death in 2001, his library, which according to Waugh consisted of 3½ tons of books and manuscripts, was auctioned in London and sold to a Chinese businessman.

We are indeed fortunate that Klinger’s statue, a small yet pointedly symbolic sliver from this epic story, has surfaced on Huntington Avenue. By comparison with Klinger’s original monument (which survives in Leipzig), the MFA’s Beethoven — without a throne, or even legs below the thigh — suggests a more humbled deity. The piece’s label also allows this Beethoven to guard its post-Secession secrets. The sculpture is designated as a “gift of Paul Wittgenstein,” who is referred to in the label text as simply “Karl’s son Paul, a concert pianist who had moved to New York.”

A first-time viewer might therefore contemplate the piece on purely aesthetic terms, unburdened by the cumulative weight of the family’s history. But once you know the larger story, the sculpture becomes a kind of mediating figure between past and present, its aura all the more searing.

The Vienna Secession’s original motto was “To every age its art, to art its freedom.” One might borrow from this cadence and append a modest summary: To every age its Beethoven.

This essay was published in the Boston Globe on October 27, 2012 under the headline “Composed in Marble.” It was accompanied by the image above, courtesy of the Museum of Fine Arts.